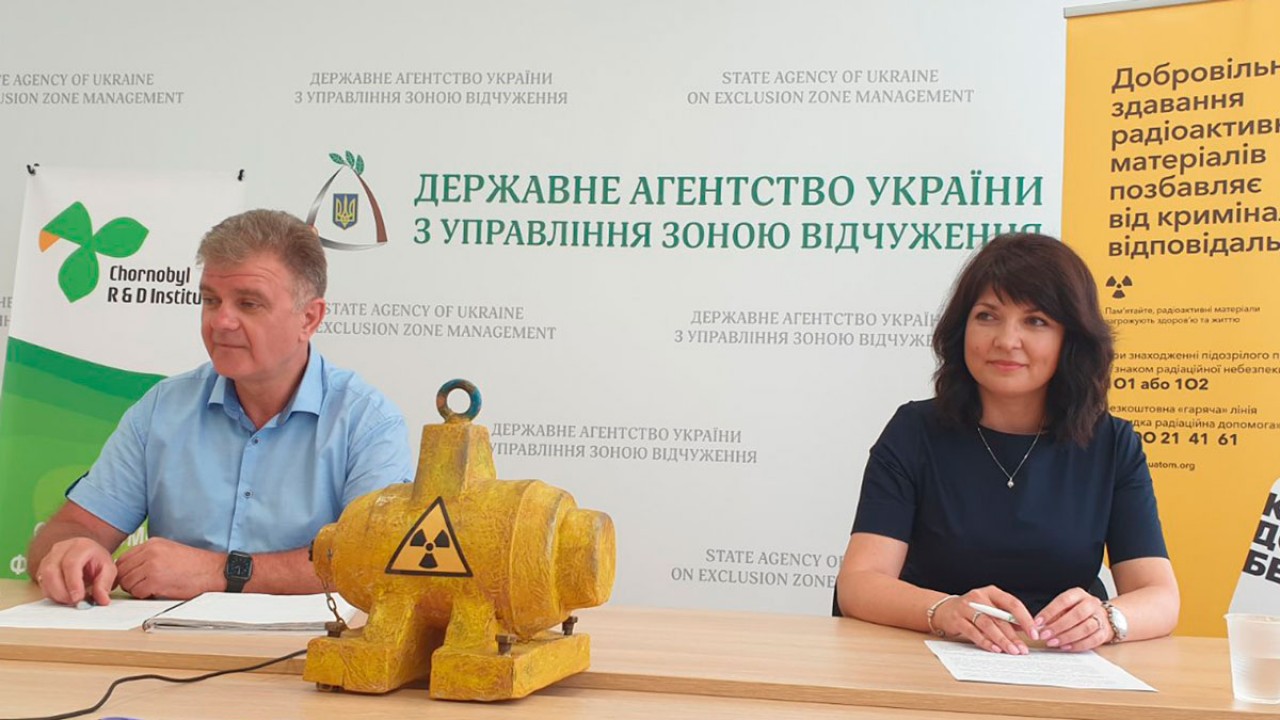 On June 15, 2020, the Most-Dnipro news agency hosted an online press conference dedicated to the launch of the public outreach campaign “KROK do Bezpeky” (STEP to Safety) that was launched within the framework of the Project.

The Donor of the Project – U.S. Department of State through Oak Ridge National Laboratory

The Implementer of the Project – PU “Chornobyl Research and Development Institute”

Participants of the press-conference:

Serhii Kalashnyk, Head of the state Agency of the Exclusion Zone Management

Serhii Berezan’,  Director of the Department of Ecology and Natural Resources of the State Administration of Dnipropetrovsk Region

Viktor Sviderskyi,  Director of the Dniprovskyi Interregional Branch of the “Association Radon”

Elena Salnyk, Project Manager of the project "Public Outreach and Information Campaign on the Amnesty Program of Orphaned Ionization Radiation Sources" of the PU “Chornobyl Research and Development Institute”

“KROK do Bezpeky” radiation awareness and control information campaign was made possible by the support of the United States Government. Dnipropetrovsk region was chosen as the most industrially developed region of the country. Sources of ionizing radiation are devices with radiation components. They are used in most industrial processes in production, science and medicine.

In the early 1990s, the control system for dangerous devices collapsed, and thousands of ionizing radiation sources disappeared, ending up in landfills, scrap metal, basements of abandoned shops, garages and private houses. Being outside of the state control, radioactive sources pose a serious threat to nuclear safety, to life and health of citizens.

"I thank very much the U.S. Government for the technical support for Ukraine on the path to creating a radiation-safe environment. "Orphaned" ionizing radiation sources pose a potential threat to both humans and nature. If citizens are informed, they will be able to protect themselves and know where to turn if such sources are found. " - Sergey Kalashnik - the Head of SAUEZM declared

"It must be understood that some part of the legacy sources lie somewhere. And those who own them may not even know what kind of device it is. And some may know, but are afraid to report. Therefore, this campaign is not only about sources of ionizing radiation in the Dnipropetrovsk region. It is about the formation of an environment in which the handling of radioactive components is treated responsibly. This is how we increase nuclear safety in the region. " –  Sergey Berezan’, the Director of Department of Ecology and Natural Resources of the Dnipropetrovsk regional public administration noted.

"Any interaction of non-specialists with sources of ionizing radiation, and any attempts to disassemble them lead to local radiation accidents. After all, the devices contain materials of different power with alpha, beta, gamma and neutron radiation. We then have to eliminate the leaks of man-made radiation, conduct complex research and spend money on burying not only the source itself, but also items and property that are contaminated with radiation. Therefore, it is better to safely and correctly get rid of such sources, informing experts. Moreover, criminal liability in the case of voluntary notification of the presence of IRS is abolished.”- Viktor Sviderskyi, Director of the Dniprovskyi Interregional Branch of the “Association Radon” said.

“Our goal is to give simple answers to complex questions and show citizens and everyone involved in the system of control and management of radwaste and IRS an algorithm of actions. Our campaign will apply to everyone, from children and adolescents to heads of services and departments. To do this, we will prepare unique informational and explanatory content that will help to understand the need to be aware and learn simple rules of conduct in case of contact with IRS. And it will definitely help to preserve life and health, which are the highest value for everyone. " – mentioned Elena Salnyk, Project Manager of the project "Public Outreach and Information Campaign on the Amnesty Program of Orphaned Ionization Radiation Sources" of the PU “Chornobyl Research and Development Institute”.

The information campaign in Dnipropetrovsk region will last until May 2021. And it will end with a program of pilot collection of sources of ionizing radiation.